This week we (the participants of the Dark Days Challenge) were challenged to create a soup or one-pot-meal. I just didn't really feel like making soup. No soup will be had. If you want to make a one-pot meal in the form of baked beans, please see my post about mapley baked beans, and have a nice day.
Posted by Samantha at 5:45 PM No comments: 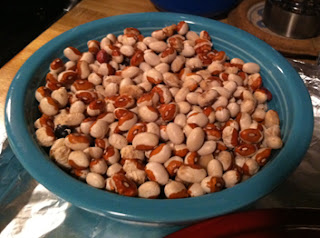 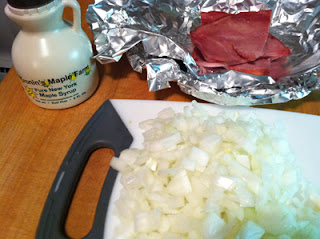 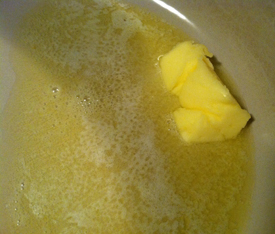 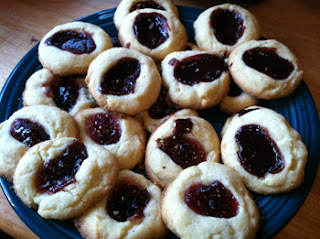 Posted by Samantha at 7:33 PM No comments: 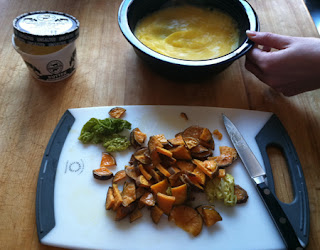 Some of my favorite meals are also the simplest. I love preparations that bring out the biggest brightest flavors in vegetables, with merely a bit of fat and salt. The photo above are the ingredients that went into a quick and easy brunch that a friend and I prepared last week: some leftover roasted sweet potato and cabbage thrown into scrambled eggs. It made a filling and delicious breakfast.

Add a bit of this cheese and something so simple becomes kinda decadent. That oozing deliciousness is 3-Corner Field Farm's Shushan Snow cheese, it is their version of a Camembert and it is ridiculously good.

Right now I've got some cabbage and fennel bulb roasting in the oven, yet another simple meal that I can't wait to eat. Seems like the Dark Days Challenge is only challenging for me in terms of actually writing about the local meals that I prepare. The meals themselves are just what I eat. It seems as though I will only be contributing bi-weekly posts for the Challenge, unless something interesting happens that I feel a need to blog about. I'm hoping to make some meals in the coming weeks that will be worthy of recipe-sharing. Perhaps a gluten free gnocchi is in order, that's one I definitely hope to share one day soon.
Posted by Samantha at 6:54 PM No comments:

Anyone who has taken a moment to browse this site will notice that I rarely post to it. Looks like that is about to change as the Dark Days Challenge has begun, and I did indeed sign up for it. For those not participating, the challenge runs from November 27th through March 31st and the idea is to eat local meals and post about them every week or every other week.

For this challenge I will obtain all food from local farms, farmer's markets, my garden, and my pantry (I put up a great deal of fruit preserves and frozen items during the growing season). Most local eating challenges adhere to a 100 mile radius, but most people in this challenge, since it's a winter challenge, seem to be going with a 150 mile limit. That said, there will be a few exceptions; readily available to me are the grains, beans, and cooking oil from Cayuga Pure Organics, which happens to be located about 200 miles away from me, so that is one exception I plan to make. Other exceptions to the 150 mile limit are things like salt, some spices, sugar, a limited amount of citrus (there is lemon and/or sugar in almost all of the jams that I make), as well as chocolate, coffee, and tea.

I'd like to acknowledge right now the fact that I've accepted this challenge well aware of the fact that I approach it from a place of privilege. I can afford to buy most of these foods, and I do just that. If my family relied on me to grow food that would sustain us in the wintertime, we'd be very hungry right now. That picture above? That's all there was to harvest from my garden today, I didn't plan things out very well for a winter garden, so I'm lucky that I can splurge on all of the produce I need from local farms. I've learned from this, and next year I hope to extend my garden's life much longer.


Since I'm a little slow getting things started around here, this post is about a day's worth of local meals. Future posts are not likely to be as winded. 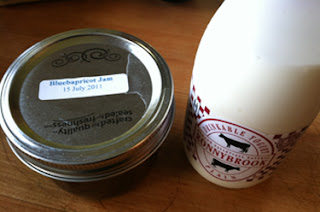 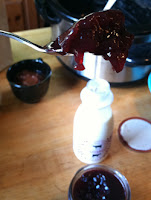 I started simple today with a plain drinkable yogurt. I try to avoid these because they're made of plastic, but they're really good. I like to drink a little of the yogurt plain, then sometimes I'll spoon in some jam. Today I decided I'd open one of my jars of Blueberry Apricot jam. I don't usually say this, and I sometimes find it annoying when others do, but it seriously tasted like summer. I'll also say that I was suddenly transported to a sunny day in late July, standing under an apricot tree, the apricots hot from the sun. But that's all I'll say about it.

On Sundays, I often like to have something small and simple when I first get up, and then eat a big filling meal in the afternoon. That way I have something small in the evening instead of a big over-filling meal. Today my filling afternoon meal made plenty for leftovers. I've been wanting polenta but don't have any at the moment, so I made a porridge out of some corn meal I had from Cayuga. 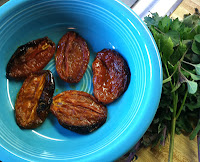 I added a diced poblano pepper that I had briefly sauteed, some herbs from my garden, some pecorino cheese from Valley Shepard Creamery and some slow roasted tomatoes that I defrosted earlier in the day.

Then I cracked two eggs on top, grated a tiny bit more pecorino over it, and put the whole thing in the oven for 15 minutes.

Afterwards I had a snack of some apple butter that was overflow from the jars I'd put up earlier in the morning. 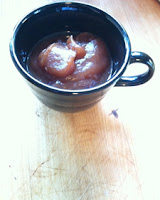 By the time dinner time rolled around a little while ago, a small snack would do. I fell hard for this beautiful cabbage the other day.

It's already been two meals, and there is still plenty left. It's spicy, sweet, and the texture is like endless lacinato kale, but firmer. Tonight, I sliced some up, brushed on some of Cayuga's sunflower oil, sprinkled on some salt, and roasted it the way Melissa Clark suggests in her new book. 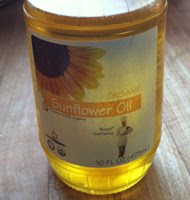 I very much look forward to seeing what other participants in this challenge come up with, especially other folks in my region!

Posted by Samantha at 6:24 PM No comments:

Scoff all you want, but I still believe in luck, and luck I've got.

It's a typical, blustery autumn day (typical days being oh so rare in our time). This weekend, aside from attending a gem sweater potluck, I'll be putting-up preserves with the last of the season's ground cherries, cooking-up an Italian plum jam, liqeur-izing my elderberry vodka, and checking-in on the fermentation of my 2 gallons of hard cider (photos coming soon).

I'm seriously considering signing up for this years Dark Days Challenge, which will mean weekly posts about the local meals I'm eating during the slimmest months for fresh, local produce. The meals I can handle, but the weekly posts???

Stay tuned, might be worth it!
Posted by Samantha at 1:16 PM No comments: